As Summer Shakespeare Festival kick off, controversial new novel asks if we have the story all wrong.

When he was researching his acclaimed novel 1492 (St. Martin’s Press), Newton Frohlich stumbled across an even more controversial moment in history, and evidence for a possibility he’d never considered: that the author of the greatest texts in the English language wasn’t who we think he was.

Frohlich dove into the research for more than a decade, and the result is The Shakespeare Mask (Blue Bird Press, July 2014), a novel that explores the life of Edward de Vere, the 17th Earl of Oxford—and, Frohlich says, a more logical choice for the author of the works attributed to “Shakespeare.”

“Because de Vere was the premier nobleman of England, he was unable to publish and present his plays in his own name,” Frohlich says. “Social strictures considered that inappropriate for a man of his status. So he did what nobles of the time did: he used a pen name and employed a front man, the Stratford man.” Frohlich’s work recreates the Tudor period and de Vere’s place in it, including his remarkable education, his travels in Italy, where half of Shakespeare’s plays are set, and his affairs—sexual and otherwise—with Elizabeth, the Queen of England, as well as with several other women, including a lover his sonnets describe as the “dark lady.”

Frohlich reviewed as many original documents from the time as he could, and even met with a descendant of the Earl of Oxford to make his story as accurate as possible. The resulting novel has been well received, coming on the heels of the popular movie Anonymous and a growing popular and academic push to re-examine the authorship question. 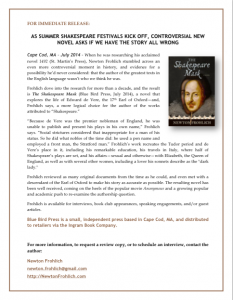