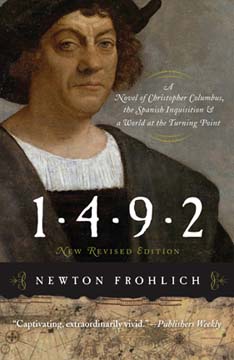 Fifteenth-century Spain was a terrifying place. It was the time of the Inquisition—a time of torture, betrayal, and unexpected courage. The Muslim world was struggling to keep the West in an economic vise, the Christian world was fighting back against their control of its trade routes, and the Jews were caught in the middle—tortured if they assimilated, expelled or killed if they clung to their heritage. Into this turbulent scene step a unique combination of strong-willed characters, brought to life with stunning realism by award-winning novelist Newton Frohlich.

Cristoforo Colombo, ingenious sailor and explorer with one foot in the Jewish world and one in the Christian, is determined to reach the East via the West—if only he can find a way to finance his voyage. His Christian wife, Filipa, offers him social acceptance and valuable contacts while the beautiful and talented Beatriz rekindles in him the spark of his true identity—one he’s been forced to hide. The influential Santangel family, converted Christians, risk their fortunes to finance the voyage of discovery—and risk their lives when they resist the Inquisition. And the imperious Queen lsabel, who holds the power to change all of their lives, must choose at last whether to sponsor the grand scheme set before her.

1492 is available at your favorite neighborhood or online bookseller.
Amazon.com    BarnesAndNoble.com   Indiebound

Bookstores: 1492 is available to the book trade and libraries through SCB Distributors and all major wholesalers. To contact SCB Distributors, phone: 310-532-9400 or Toll Free: 800-729-6423. Email: scb@scbdistributors.com

Materials for the Press and Media>>

Enthusiastic Reviews for 1492: A Novel of Christopher Columbus, the Spanish Inquisition & a World at the Turning Point:

“Captivating, extraordinarily vivid first novel…. Frohlich, an attorney, spent eight years researching his book and brings remarkable realism to his chilling depiction of the fanaticism fueling the Inquisition…. This is a convincing, detailed re-creation of the Old World on the brink of discovery.” —Publishers Weekly

“A rollicking, readable, and fascinating story…. For a grand, sweeping tale of the history of Spain at the end of the 15th century, 1492 is hard to beat.” —St. Louis Post Dispatch

“Frohlich…shows a fine gift for storytelling, and his recounting of the horrors of the Inquisition is striking. Columbus himself emerges as a man of great talent with an almost mystical self-confidence…. The sheer power of the historical events is likely to keep the reader engaged.” —Booklist

“1492 is a novel. And a very fine one…. Newton Frohlich labored for eight years in the creation of this well-spun tale…. Impressive scholarship supports Frohlich’s fiction…. I read this excellent novel until the wee hours several nights successively until the final page. The presence of terror is keenly conveyed. The sense of injustice is breathtaking. The characters of queen and inquisitor and explorer take form and walk the pathways of your mind.” —National Catholic Reporter

What Readers and Reviewers Are Saying:

“Phillippa Gregory fans will be delighted”
“I confess, I knew little about Christopher Columbus outside of that which we learn as schoolchildren. . . . Frohlich’s novel clears up many . . . myths with a novel that was eye-opening, and quite honestly, difficult to put down. He succeeds in  painting a vivid picture of a fascinating, focused man intent on proving a theory he had developed that would take him to the West Indies by sailing west. As fascinating, however, is the backdrop on which the story is set: 15th-century Spain. In all the history I have read on the Spanish Inquisition, I was not aware of its horrific impact on the Jewish people living in Spain at that time; it was this part of the narrative that I found most compelling. The parallels between Muslims, Jews and Christians both then and today are, honestly, a bit frightening. The storytelling is simply superb. Whether you are a history buff or a fan of historical fiction (Phillippa Gregory fans will be delighted), this novel will not disappoint! I really enjoyed it, and I highly recommend it. Sharing the words to author Frohlich from a priest in the Columbina Library in the Cathedral of Seville: ‘Those who cannot remember the past are condemned to repeat it.’  If all of history could be retold in such a vivid, readable manner, many would be far more likely to remember it.” —MommaOntheRocks.com

“Timely addition to the historical fiction market”
“An intimately detailed, inimitably researched, and shockingly timely addition to the historical fiction market, 1492: A Novel of Christopher Columbus, the Spanish Inquisition, and a World at the Turning Point, by Newton Frohlich, separates fact from the myths surrounding the voyage of Columbus. It provides a new and illuminating window into a crucial moment in world history when human tragedy and human triumph were inextricably intertwined and is surprising relevant to history today.”  —LA Splash Magazine’s 2016 Gift Guide Roundup

“One of those great examples of historical fiction”
“1492 is one of those great examples of historical fiction that allows you to dive deep into a new world without even realizing how much you’re learning as you go. Queen Isabel is possibly the most interesting of the characters, embroiled in a battle against the Arabs and obsessed with her belief that the Jews are cursing Spain while Columbo hides his own Jewish background and rallies her for funding for his exploration. This book doesn’t focus so much on Christopher Colombus’ actual voyage but more on the time leading up to it. Because of the religious tension of the Inquisition, with Muslims controlling most trade routes, Colombo comes into play because he believes he can reach the east by sailing west. For readers looking to gain a real sense of what Spain in the late 1400’s felt like, 1492 is the perfect way to achieve that without the dry text of a history book.” —UnitedbyPop.com

“An epic story, well-told!”
“The late 15th century was a very dangerous time to live in western Europe. Centuries of uneasy co-existence between Muslim invaders and Christian and Jewish natives exploded as new discoveries threatened the Arab monopoly on the lucrative spice trade. Adding to the tumult was the determination of rising aristocracy to steal the wealth of the Jews, who were the merchants and bankers. The most aggressive of these was Queen Isabel of Castile, a petite warrior-leader who called in the Inquisition in order to torture and murder ‘New Christians.’ These were families which had been Jewish but converted to Christianity over the past century; however, many continued in private to observe Jewish festivals and food customs. Their cruelty and violence knew no bounds, and the Queen ignored all entreaties to stop them. . . . Columbus also was covering for the fact that he, too, was a New Christian, and fairly devout. . . . How he persevered for many years to get the financial and royal backing for his voyage of discovery is fascinating, and more complicated than we learn in school. This is an epic story, well-told!” —Book Bit for WTBF-AM/FM in Troy, Ala.

“Incredible book . . . A great read”
“I learned so many things in school that seemed to have changed as I have grown up. This incredible book is a great example of that—dropping light on things like how Queen Isabella didn’t fund his voyage because she was too busy funding the Spanish Inquisition. . . . A great read. . . Perfect…for your favorite history buff or avid book reader.” —Operation40k.com